If you’re tuned in to technical topics, then you’ve likely heard my CEO Satya Nadella use the phrase Growth Mindset a few times.

I’ve been thinking about this phrase recently and realized that the first time I hear a phrase like this, my brain attempts to formulate a definition or understanding of it and then I have a tendency to stick to that definition every subsequent time I hear it even if it’s not entirely accurate or entirely what the speaker intended.

I wonder them, what does “growth mindset” actually mean or what does Satya intend it to mean when he uses it to describe Microsoft?

After some pondering and reading, I’ve concluded that it means (to me at least) that a person…

Hopefully that’s not too esoteric.

Gartner recently published an article on the topic where they used Microsoft as a positive example. In their article, they show this chart… 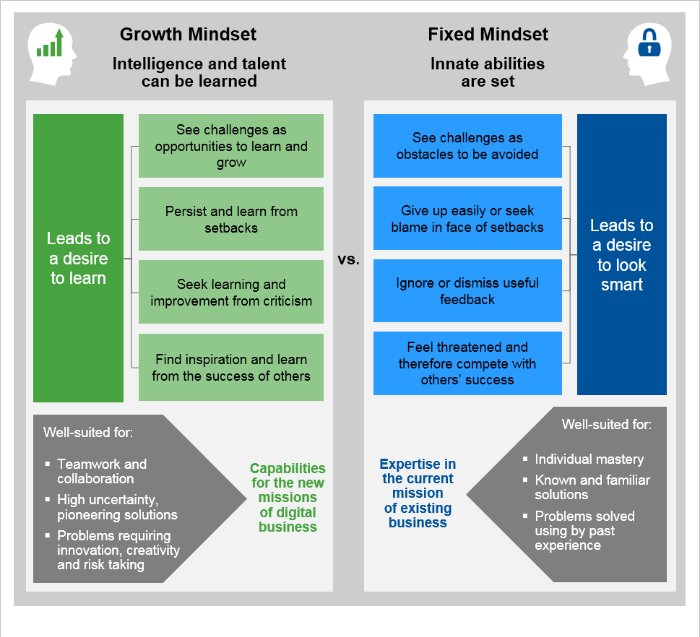 This graphic appears to indicate (and I would agree) that the defining characteristic of someone with a growth mindset is a desire to learn over a desire to look smart.

Most people would claim to value learning, but that’s the easy part. the hard part is that doing so often necessitates sacrificing looking smart… and that’s not so easy.

I have an example from my own life.

I used to work for Gateway Computers. It was a long time ago in 1998 when Gateway was just about the most likely choice for a home computer. I worked in a call center in Colorado Springs, CO.

At one point, I worked 4 12-hour days (Thursday through Sunday) per week and I remember being intellectually exhausted after about 8 hours of visualizing and solving users’ computer woes.

Side Story: At one point in my tenure at Gateway, I joined a group formed to experiment with what was called (if I remember right) Customer Chat Support (CCS). CCS was a strategy to increase our call center’s ability to handle support calls by having a moderator classify calls and send them to various rooms with up to 5 others and a single Gateway technician. Sometimes I was the moderator, but usually I was the tech and it was my job to solve 5 problems at once!

At another point in time, I was on the Executive Response Committee (ERC) and I responded to folks who had been courageous enough to write directly to Ted Waitt - the then CEO of the company. I talked to people with all kinds of troubles.

Behind the headsets in a tech support call center live together, as you might imagine, a lot of geeks. When the geeks were on break, we would chat and I quickly realized that there were two types: those who were attempting to establish that they were very knowledgeable, and those who were learning.

I didn’t realize it at the time, but I was learning about growth mindset and deciding that I would attempt personally to eschew the status of “one who knows,” and attempt instead to ask questions, discover, learn, and grow. There’s so little the guru status actually provides you anyway that is not an illusion.

Like someone who’s seeking to advance his character and giving up his reputation, one who genuinely seeks growth of knowledge will end up further along.

I hope that’s encouraging and if necessary I hope it’s challenging too.